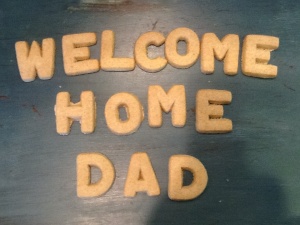 I haven’t posted for a few days, but I have a pretty good excuse. I have been running back and forth from the hospital for the last five days. Here’s the scoop:

On Tuesday Andy called from work to tell me he was going to urgent care for an infection on the back of his leg. The physician’s assistant he saw told him it was staph, gave him antibiotics and sent him home.

Andy spent Tuesday night feeling pretty crumby but went to work on Wedesday. By that afternoon he was feeling so miserable he ran the front of his car into the garage when he got home. That evening, despite being on antibiotics, his fever went from 98.6 to 103.5 in an hour’s time. I peeked at the infection, which by that time was looking quite scary, so we called a friend who brought him to the E.R. His temp continued to rise and spent the night on good pain meds and antibiotics, but, by morning, he was still running a fever and his wound wasn’t looking any better. Still at the hospital, he saw a slew of doctor’s who ruled out a flesh-eating bacteria, but couldn’t find anything in his blood tests or wound-cultures to point to as a cause of the infection. One surgeon opined that the wound was likely the result of a brown recluse spider–curious I thought, since most authorities do not think they live in Minnesota. Eventually the working theory evolved into Lyme’s disease (a Lyme’s test was inconclusive). Meanwhile I spent hours Googling every other possible diagnosis and generally freaking myself out.

By Friday, Andy’s fever broke, but the wound continued to look nasty and a possible secondary infection developed and spread several more inches above and below the initial wound. A faint red line also appeared spreading up from the area of the infection toward the groin.

The hospital food was atrocious and Andy hinted on Facebook that he could really go for some White Castle. His friend, Aaron, showed up with a sack of sliders on Friday night. Afterward, Andy claimed to be feeling like a million bucks. The next morning the infection was looking better.

Saturday night I brought him pizza from Red’s Savoy on 7th Street in St. Paul. (Well, they call it pizza, but it’s really more like a 10 pound cheese, sauce and topping casserole.) By the time I got to the hospital though, the redness around the initial wound had spread again and was darker. Additional antibiotics were ordered and more blood work done.

Then miraculously on Sunday morning, he seemed to be doing better again. That night, the infectious disease doc told him she was switching him to oral antibiotics and that if he tolerated them well, he could go home today. Luckily he was fine overnight and the boys and I picked him up this morning. We still aren’t really sure what caused the infection(s), but Andy will go back for another Lyme’s test in a few weeks…so maybe we’ll have an answer then.

Hopefully things will be back to normal and I’ll have more recipes to post soon.